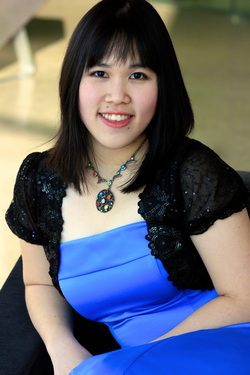 In 2014, Ms. Darmahkasih made her debut with Toledo Opera as well as singing the title role "Patience" with Findlay Light Opera Company. She is also excited to sing her first Madame Lidoine next Spring 2015 with BGSU Opera Theater while continuing her season with Toledo Opera in the production of Susannah and Lucia di Lammermoor with Toledo Opera.


Recently, she has appeared as Mustardseed in the Midsummer Nights Dream production of Harrower Opera Workshop, an improvisation opera "Persistence" as Mother directed by Ann Baltz, Dioclesian as Shepherdess and in Hercules as Phoebe (arr.Shield). Ms. Darmahkasih has appeared in BGSU productions of  Die Fledermaus, Pirates of Penzance, and Mikado.

An Indonesia native, she successfully shows her dedication in both singing and academic in Bowling Green State University where she has fortunate to work with tenor, Christopher Scholl.
As a 10 years old, she started voice lessons with soprano Renata Lim who found her talent singing.

Ms. Darmahkasih is a recipient of 2013 Presser Foundation Scholar Award and 1st place winner on 14th Annual Conrad Art Song competition (in collaboration with pianist Jeff Manchur). In 2012, she was named as a finalist in BGSU Concerto Competition. A recipient of other numerous scholarships such as Agnes Fowler Scholarship, Cathy McCambridge Memorial Scholarship and Marie Zigman Scholarship, Ms. Darmahkasih continues to serve God and community while  keep pursuing her love in opera, cantatas, oratorio, as well as chamber music repertoire. ﻿